The Scandal that Shook Paris and the Woman Behind it All 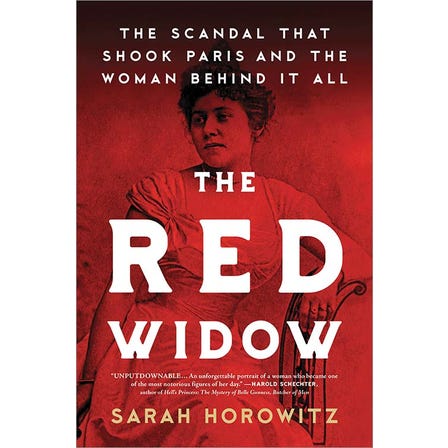 "An unforgettable portrait of a woman who became one of the most notorious figures of her day and whose scandalous story sheds fascinating light not only on her own tumultuous time but ours as well." — Harold Schechter, author of Hell's Princess: The Mystery of Belle Guinness, Butcher of Men

Sex, corruption, and power: the rise and fall of the Red Widow of Paris

Paris, 1889: Margeurite Steinheil is a woman with ambition. But having been born into a middle-class family and trapped in a marriage to a failed artist twenty years her senior, she knows her options are limited.

Determined to fashion herself into a new woman, Meg orchestrates a scandalous plan with her most powerful resource: her body. Amid the dazzling glamor, art, and romance of bourgeois Paris, she takes elite men as her lovers, charming her way into the good graces of the rich and powerful. Her ambitions, though, go far beyond becoming the most desirable woman in Paris; at her core, she is a woman determined to conquer French high society. But the game she plays is a perilous one: navigating misogynistic double-standards, public scrutiny, and political intrigue, she is soon vaulted into infamy in the most dangerous way possible.

A real-life femme fatale, Meg influences government positions and resorts to blackmail—and maybe even poisoning—to get her way. Leaving a trail of death and disaster in her wake, she earns the name the "Red Widow" for mysteriously surviving a home invasion that leaves both her husband and mother dead. With the police baffled and the public enraged, Meg breaks every rule in the bourgeois handbook and becomes the most notorious woman in Paris.

An unforgettable true account of sex, scandal, and murder, The Red Widow is the story of a woman determined to rise—at any cost.

"A dazzling yet nuanced portrait of femme fatale Marguerite Steinheil... Fans of true crime and women's history will find this a page-turning read." — Booklist