The Greatest Summer in Baseball History

How the '73 Season Changed Us Forever 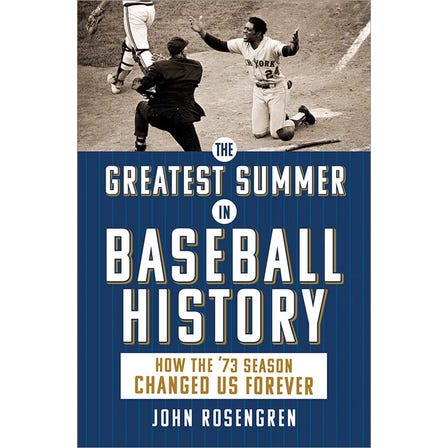 "The vivid story of a young Reggie Jackson on Charlie Finley's A's and the veteran Willie Mays on Yogi's Mets, both destined for the '73 series."

A rousing chronicle of one of the most defining years in baseball history that changed the sport forever.

In 1973, baseball was in crisis. The first strike in pro sports had soured fans, American League attendance had fallen, and America's team—the Yankees—had lost more games and money than ever. Yet that season, five of the game's greatest figures rescued the national pastime.

Hank Aaron riveted the nation with his pursuit of Babe Ruth's landmark home run record in the face of racist threats. George Steinbrenner purchased the Yankees at a bargain basement price and began buying back their faded glory. The American League broke ranks with the National League and introduced the designated hitter, extending the careers of aging stars such as Orlando Cepeda. An elderly and ailing Willie Mays—the icon of an earlier generation—nearly helped the Mets pull off a miracle with the final hit of his career. Reggie Jackson, the MVP of a tense World Series, became the prototype of the modern superstar.

The season itself provided plenty of drama served up by a colorful cast of characters. The Mets, managed by Yogi Berra, performed another near miracle, rising from last place in the National League East to win the division and take the A's to seven games in the World Series. Pete Rose edged Willie Stargell as the National League's MVP in a controversial vote. Hank Aaron chased Babe Ruth's landmark 714 record in the face of racial threats. Reggie Jackson, the World Series MVP, solidified his reputation as Mr. October. Willie Mays, arguably the best player of the '50s and '60s, hit the final home run of his career and retired, no longer able to keep pace with the younger players of the next generation. Future Hall of Famers Dave Winfield and George Brett played in their first major league games; Luis Aparicio and Mays played in their last.

"It's a season-ticket to one of the greatest years in baseball history. John Rosengren has given us one of the most enjoyable baseball books to come along in years."

–Jonathan Eig, author of Luckiest Man: The Life and Death of Lou Gehrig and Opening Day: The Story of Jackie Robinson's First Season