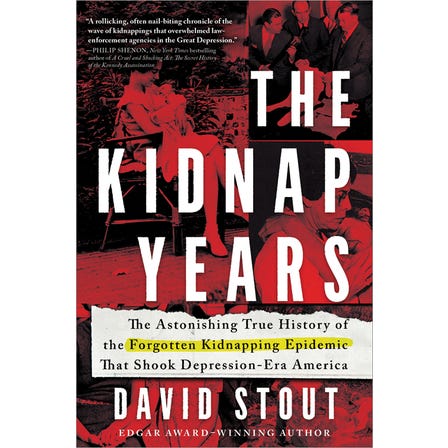 "A thrilling account that puts the 1932 Lindbergh baby kidnapping case, billed as "the crime of the century," in the context of the thousands of other kidnappings that occurred in the U.S. during the Prohibition and Depression eras...will enthrall true crime fans."—Publishers Weekly, STARRED review

The Great Depression was a time of desperation in America—parents struggled to feed their children and unemployment was at a record high. Adding to the lawlessness of the decade, thugs with submachine guns and corrupt law-enforcement officers ran rampant. But amidst this panic, there was one sure-fire way to make money, one used by criminals and resourceful civilians alike: kidnapping.

Jump into this forgotten history with Edgar Award-winning author David Stout as he explores the reports of missing people that inundated newspapers at the time. Learn the horrifying details of these abduction cases, from the methods used and the investigative processes to the personal histories of the culprits and victims. All of this culminates with the most infamous kidnapping in American history, the one that targeted an international celebrity and changed legislation forever: the Lindbergh kidnapping.

The Kidnap Years is a gritty, visceral, thoughtfully reported page-turner that chronicles the sweep of abductions that afflicted all corners of the country as desperate people were pushed to do the unthinkable.

Fans of The Postman Always Rings Twice and other 30s and 40s American Noir crime novels will be fascinated by the true crime of the times.