Tell Me What Really Happened 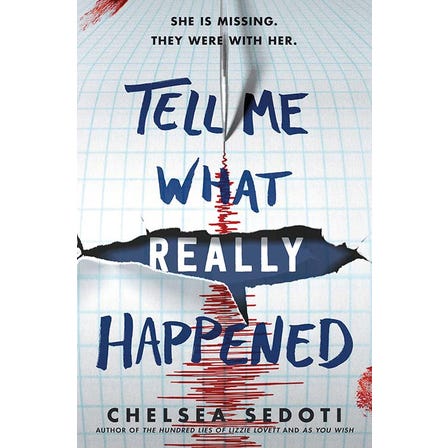 There are stories about the woods around Salvation Creek and the people who have gone missing. Now their friend is one of them. A riveting, fast-paced YA mystery told entirely through first person police interviews of four teens over the course of a few hours.

It was all her idea. They would get away from their parents and spend the weekend camping. Down by Salvation Creek, the five of them would make smores, steal kisses, share secrets.

But sometime around midnight, she vanished.

Now the four friends who came back are under suspicion—and they each have a very different story to tell about what happened in the woods.

The clock is ticking. What are they hiding? Who is lying? Dark truths must come to light if their friend is to be found…

The Hundred Lies of Lizzie Lovett

It Came from the Sky

"Easy to read and hard to put down."—VOYA on As You Wish

"A dark, comedic mystery about a girl's quest for proof that ultimately helps her discover some truths about herself." —Justine on The Hundred Lies of Lizzie Lovett

"[A] quirky, intelligent novel." —Booklist on It Came from the Sky