By Natalie D. Richards
$10.99
Be the first to review this product 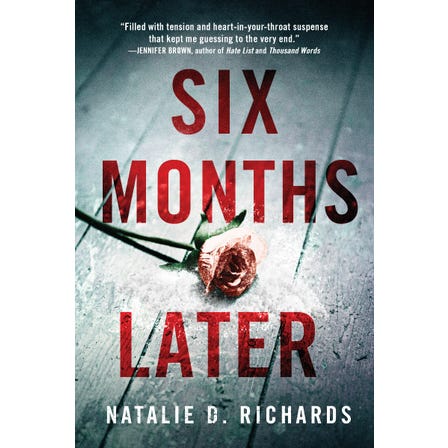 From the bestselling author of teen suspense books, Natalie D. Richards, comes a psychological thriller about a girl who wakes up with everything she’s ever wanted, but can’t remember the last six months of her life, perfect for fans of One of Us Is Lying and If I Stay.

When Chloe fell asleep in study hall, it was the middle of May. But when she wakes up, snow is on the ground, and she can't remember the last six months.

Before, she'd been a mediocre student.
Now, she's on track for valedictorian and being recruited by Ivy League schools.

Before, she never had a chance with sports star Blake.
Now he's her boyfriend.

Before, she and Maggie were inseparable.
Now her best friend won't speak to her.

What happened to her? Remembering the truth could be more dangerous than she’d ever imagined.

Praise for Six Months Later:
YALSA Teens Top 10 nominee
"[A] smart, edgy thriller."—Kirkus
"Well paced and beautifully written…This romantic thriller will leave readers on the edge of their seats until the very last page."—School Library Journal
"An intense psychological mystery… has the feel of a high-stakes poker game in which every player has something to hide."—Publishers Weekly

After years as a professional paper-pusher, NATALIE D. RICHARDS decided to trade in reality for a life writing YA fiction. She lives in Ohio (Go Bucks!) with her husband, three children, and a ridiculously furry dog named Yeti. This is her second novel. Visit her on Twitter @natdrichards or at nataliedrichards.com.
Reviews
Write Your Own Review
VIEW
9781728209890
All content and design copyright © Sourcebooks, LLC 2021. All Rights Reserved.