By Chelsea Sedoti
As low as $10.99
SBCNFG2312
Be the first to review this product 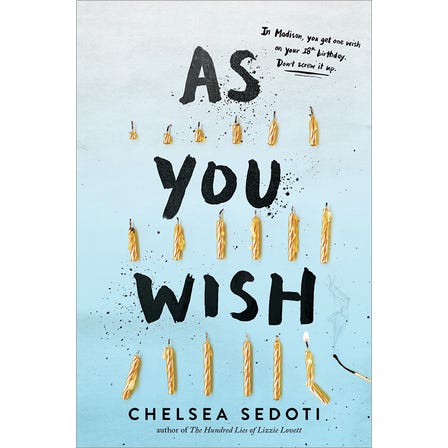 From bestselling author Chelsea Sedoti comes a thought-provoking contemporary young adult book about a small desert town filled with Mojave magic where everyone gets to make a wish on their eighteenth birthday. If you could make one wish that was guaranteed to come true—what would you wish for?

Most of Eldon's classmates have had their wishes picked out for months, even years. Not Eldon. He's seen how wishing has hurt the people around him. His parents' marriage is strained, his sister is a virtual ghost in their house, his ex-girlfriend is dating his ex-friend...where does he even begin?

One thing is for sure: Eldon has only twenty-six days to figure it out—and the rest of his life to live with the consequences.

Also by Chelsea Sedoti:
It Came from the Sky
The Hundred Lies of Lizzie Lovett

Praise for As You Wish:
"Heartbreaking, other times hilarious, but always thought-provoking. An unexpectedly affecting book that will have readers pondering what they would wish for if given the chance."—Booklist
"Poignant… Will inspire readers to explore the question: if you could have one wish, what would it be?"—Kirkus
"An engrossing read, fantastical and believable at the same time."—Horn Book Magazine
"Depending on the reader, this novel offers different levels of intensity, starting with the everyday sort of teen troubles, progressing to difficult family dynamics, and reaching up to the ethical dilemmas wishing can create—all while being easy to read and hard to put down."—VOYA