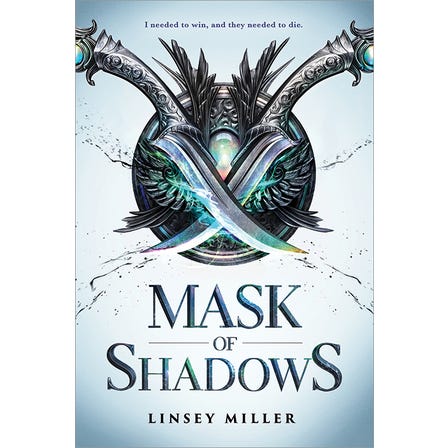 Sallot Leon is a thief, and a good one at that. But gender fluid Sal wants nothing more than to escape the drudgery of life as a highway robber and get closer to the upper-class—and the nobles who destroyed their home.

When Sal steals a flyer for an audition to become a member of The Left Hand—the Queen’s personal assassins, named after the rings she wears—Sal jumps at the chance to infiltrate the court and get revenge.

But the audition is a fight to the death filled with clever circus acrobats, lethal apothecaries, and vicious ex-soldiers. A childhood as a common criminal hardly prepared Sal for the trials. And as Sal succeeds in the competition, and wins the heart of Elise, an intriguing scribe at court, they start to dream of a new life and a different future, but one that Sal can have only if they survive.

This heart-pounding YA story of magic, danger, and revenge is perfect for readers looking for:

Praise for Mask of Shadows:

A Bustle Most Anticipated YA of 2017!

"An intriguing world and a fantastically compelling main character make for a can't-miss debut. Miller's Mask of Shadows will make you glad you're not an assassin—and even gladder Sal is."—Kiersten White, New York Times bestselling author of And I Darken and Now I Rise

"It is fabulous. Go forth and read the Hunger Games-like craftiness and intensity, Kaz Brekker-ish determination and moral questionability, and utterly charming romance." — LGBTQ Reads

"Uber bloody and action packed, Mask of Shadows is the book for anyone who loves a heavy dose of grit and gore with their fantasy." — TeenVogue.com

Trade Reviews
"Gory, well-plotted, suspenseful on every page, and poised for the sequel." — Kirkus Reviews
"Miller's gritty, lightning-paced debut features a rough-and-tumble yet movingly vulnerable protagonist: Sal is uncompromising in their convictions, and doesn't hesitate to kill when necessary but wishes to be more than just a weapon of vengeance. A complex but intriguing start to this planned duology." — Publishers Weekly
"Teen genre fiction featuring a strong gender-fluid main character." — School Library Journal
"Miller's setting is vividly drawn...a solid addition for libraries hoping to expand the gender diversity of their shelves." — Booklist
"For fans of The Hunger Games-type fiction, that's gonna be too appealing to pass up. It's gonna be too delicious to deny yourself. "Mask of Shadows," for readers age 15 and up, is gonna be a dream book." — Bookworm Sez
"Miller's combination of epic high fantasy with characters whose gender and sexuality fall outside of the mainstream norms for the genre will appeal to fans of writers who have explored the genre in similar ways, such as Tamora Pierce, Ellen Kushner, or Tanya Huff. Mask of Shadows is recommended for readers looking for a more diverse representation of gender and sexuality in their fantasy sagas, and for anyone interested in starting an exciting new fantasy series in general. " — IndiePicks Magazine
"It is fabulous. Go forth and read the Hunger Games-like craftiness and intensity, Kaz Brekker-ish determination and moral questionability, and utterly charming romance." — LGBTQ Reads
"A compelling non-binary, gender-fluid protagonist. A fascinating mix of unique world-building, gripping action, and thoughtfully-drawn characters, Mask of Shadows is a thrilling, edge-of-your-seat read." — Lambda Literary
"A fun, fast read" — Locus Magazine
"This fantasy's gender-fluid protagonist, Sal Leon, makes Miller's book worth picking up for diversity's sake alone. Her treatment of the gender issue is most notable in that it isn't really an issue... Violent and action-packed, this offering by first-time novelist Miller will circulate." — School Library Connection
"An exhilarating, violent romp of a read." — Shelf Awareness
"This is a memorable, sharply written character. While readers who identify on the GLBTQ spectrum may be easy fans as Miller handles Sal's identity with aplomb, that's certainly not the only point of note here; the impressive, intricate world building, tense action, and fierce competitors are equally strong." — The Bulletin of the Center for Children's Books
"Excellent worldbuilding... Nonstop action makes this book hard to put down. Fantasy fans will love it." — VOYA Magazine
Customer Reviews
Write Your Own Review