The Castle School (for Troubled Girls) 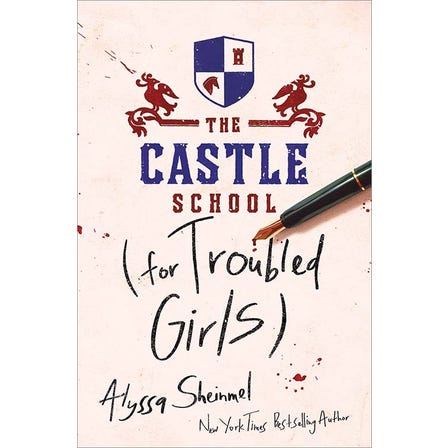 From New York Times bestselling author Alyssa Sheinmel comes the emotional story of a grieving teenager sent to a boarding school that is nothing like she expected.

When Moira Dreyfuss's parents announce that they're sending her to an all-girls boarding school deep in the Maine woods, Moira isn't fooled. She knows her parents are punishing her; she's been too much trouble since her best friend, Nathan, died—and for a while before that. At the Castle School, isolated from the rest of the world, Moira will be expected to pour her heart out to the odd headmaster, Dr. Prince. But she isn't interested in getting over Nathan's death or befriending her fellow students.

On her first night there, Moira hears distant music. On her second, she discovers the lock on her window is broken. On her third, she and her roommate venture outside…and learn that they're not so isolated after all. There's another, very different, Castle School nearby—this one filled with boys whose parents sent them away, too.

Moira is convinced that the Castle Schools and the doctors who run them are hiding something. But exploring the schools will force Moira to confront her overwhelming grief—and the real reasons her parents sent her away.

Praise for The Castle School (for Troubled Girls):
"Achingly beautiful. Moira's story gripped me from the first page and held me fast long after I finished reading."—Gilly Segal, New York Times bestselling co-author of I'm Not Dying with You Tonight
"Hooked me from page one. I couldn't stop reading until I had every single answer."—Francesca Zappia, author of Eliza and Her Monsters
"Beneath the trappings of a fast-paced mystery, this novel holds a heartrending exploration of adolescent grief... Memorable."—Booklist
"Complex and layered... A heartfelt exploration of grief, guilt, and recovery."—School Library Journal
"Mental health awareness wrapped in a captivating storyline."—Kirkus
"An effective exploration of mental illness, and it will share a coveted place on reading lists with Laurie Halse Anderson and Patricia McCormick."—BCCB

Also by Alyssa Sheinmel:
A Danger to Herself and Others
What Kind of Girl

Trade Reviews
"Mental health awareness wrapped in a captivating storyline. " — Kirkus Reviews
"Complex and layered... A heartfelt exploration of grief, guilt, and recovery." — School Library Journal
"Beneath the trappings of a fast-paced mystery, this novel holds a heartrending exploration of
adolescent grief... Memorable." — Booklist
"An effective exploration of mental illness, and it will share a coveted place on reading lists with Laurie Halse Anderson and Patricia McCormick." — The Bulletin of the Center for Children's Books
Customer Reviews
Write Your Own Review