By Kalyn Josephson
As low as $10.99
SBCNFG2968
Be the first to review this product 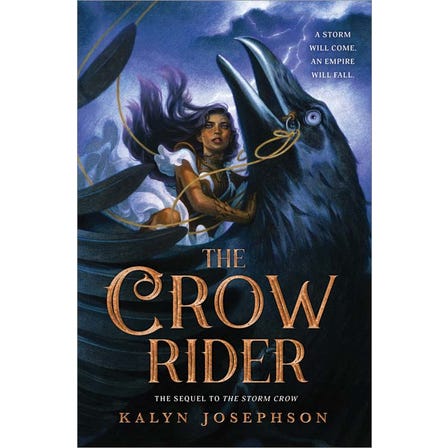 The thrilling conclusion to the epic Storm Crow duology that follows a fallen princess as she tries to bring back the magical elemental crows taken from her people, perfect for readers who want fantasy books for teens.

Thia, her allies, and her crow, Res, are planning a rebellion to defeat Queen Razel and Illucia once and for all. Thia must convince the neighboring kingdoms to come to her aid, and Res's show of strength is the only thing that can help her.

But so many obstacles stand in her way. Res excels at his training, until he loses control of his magic, harming Thia in the process. She is also pursued by Prince Ericen, heir to the Illucian throne and the one person she can't trust but can't seem to stay away from.

As the rebel group prepares for war, Res's magic grows more unstable. Thia has to decide if she can rely on herself and their bond enough to lead the rebellion and become the crow rider she was meant to be.

Perfect for readers who want:

Also in this series:
The Storm Crow (Book 1)

"Clashing kingdoms, thrilling action, and an imperfect heroine make this book a must-read."—ADRIENNE YOUNG, New York Times bestselling author of Sky in the Deep and The Girl the Sea Gave Back