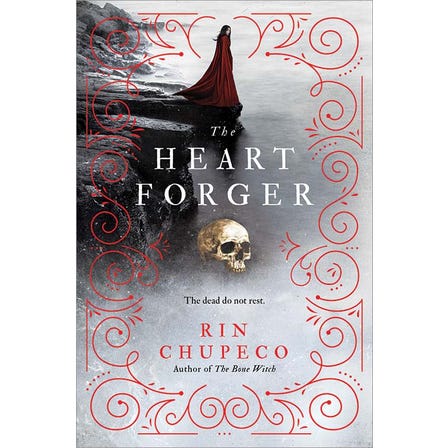 "A sequel that builds in both thrills and enchantment." —Kirkus Reviews

In The Bone Witch, Tea mastered resurrection—now she's after revenge...

No one knows death like Tea. A bone witch who can resurrect the dead, she has the power to take life…and return it. And she is done with her self-imposed exile. Her heart is set on vengeance, and she now possesses all she needs to command the mighty daeva. With the help of these terrifying beasts, she can finally enact revenge against the royals who wronged her—and took the life of her one true love.

But there are those who plot against her, those who would use Tea's dark power for their own nefarious ends. Because you can't kill someone who can never die…

War is brewing among the kingdoms, and when dark magic is at play, no one is safe.

Thrilling and atmospheric, this bestselling series is perfect for readers looking for

Praise for The Heart Forger:

"Rin's beautifully crafted world from The Bone Witch (2017) expands in this sequel, which joins dark asha Tea on her crusade of revenge...Dark and entrancing with a third volume to come." —Booklist, STARRED review

"A wonderfully original tale — even better than the first...." —RT Book Reviews

Trade Reviews
"Rin's beautifully crafted world from The Bone Witch (2017) expands in this sequel, which joins dark asha Tea on her crusade of revenge...Dark and entrancing with a third volume to come.
" — Booklist, starred review
"In this spectacular follow-up to the rich The Bone Witch, Tea's quest draws the reader further in, setting them on a more dangerous yet intriguing adventure." — Foreword Reviews, starred review
"Chupeco has crafted a glorious world for her twisting, turning plot, rich with magic, exotic beasts, romance and treachery. The alternating narratives are masterfully designed, drawing readers ever closer to their inevitable convergence. A mesmerizing tale, this sequel is even stronger than its precursor." — Shelf Awareness
"A sequel that builds in both thrills and enchantment." — Kirkus Reviews
"A dark, engaging fantasy series." — School Library Journal
"Chupeco's lush prose ensure that the emotions—cringing horror, nail-biting suspense, swoony passion—will all be accounted for. Readers who enjoy complex, densely intricate political intrigues on a par with Marchetta's Lumatere Chronicles (Finnikin of the Rock, BCCB 3/10, etc.) are the best fit for this ongoing series." — Bulletin of the Center for Children's Books
"A wonderfully original tale — even better than the first.... Readers will be pleased with the satisfying direction that Chupeco decides to go in regard to Tea's love interests. The ending is equally explosive and delightfully romantic, and the conclusion really sets up events for the next title. These books have loads of potential to become a phenomenal fantasy series." — RT Book Reviews
"Packed with page-turning intrigue, battle scenes, romance, magic, and detailed world-building, this story will keep readers engaged and hoping for more." — School Library Connection
Customer Reviews
Write Your Own Review