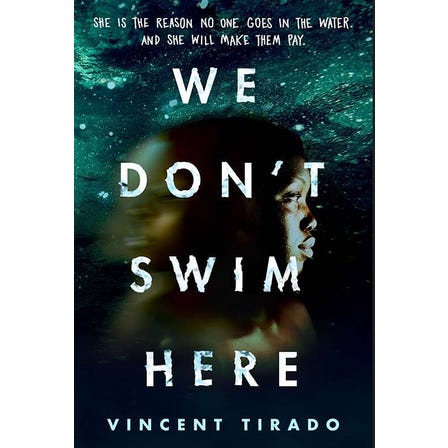 She is the reason no one goes in the water. And she will make them pay. A chilling new novel for fans of Tiffany D. Jackson, Lamar Giles, and Ryan Douglass.

Praise for Vincent Tirado's Burn Down, Rise Up:

"A queer, heart-pounding thrill ride. Fans of Attack the Block and Vampires vs. the Bronx: prepare for your newest obsession." - Ryan Douglass, New York Times bestselling author of The Taking of Jake Livingston

"A creepy, mysterious rollercoaster of a novel that had me hooked from the explosive start. Tirado packs both action and heart into this timely story." - Natasha Ngan, New York Times bestselling author of the Girls of Paper and Fire trilogy

"A breathtaking, read-it-in-one-sitting thrill of a novel." - Marieke Nijkamp, #1 New York Times bestselling author of This Is Where It Ends

"Readers will be on the edge of their seats and will have the chance to explore societal issues in a new way to answer the question "What are monsters?" when reading this book" - School Library Journal, STARRED review

"A speculative novel that blends elements of horror with a history of gentrification and systemic racism..." - Publishers Weekly

"A deadly game meets social commentary in an ode to the Bronx." - Kirkus

"Clever, tying into ripped-from-the-headlines police violence in the present-day world..." - Bulletin of the Center for Children's Books

Bronwyn is only supposed to be in rural Hillwoods for a year. Her grandmother is in hospice, and her father needs to get her affairs in order. And they're all meant to make some final memories together.

Except Bronwyn is miserable. Her grandmother is dying, everyone is standoffish, and she can't even go swimming. All she hears are warnings about going in the water, despite a gorgeous lake. And a pool at the abandoned rec center. And another in the high school basement.

Anais tries her hardest to protect Bronwyn from the shadows of Hillwoods. She follows her own rituals to avoid any unnecessary attention—and if she can just get Bronwyn to stop asking questions, she can protect her too. The less Bronwyn pays attention to Hillwoods, the less Hillwoods will pay attention to Bronwyn. She doesn't get that the lore is, well, truth. History. Pain. The living aren't the only ones who seek retribution when they're wronged. But when Bronwyn does more exploring than she should, they are both in for danger they couldn't expect.