A Season of Knives 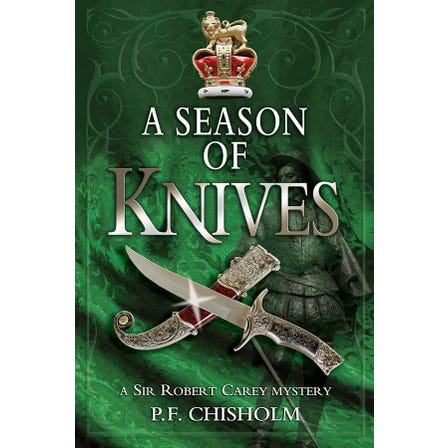 In 1592, Sir Robert Carey, a handsome courtier fleeing his creditors, his father's wrath, and the close scrutiny of his Queen, came north to Carlisle to take up his new post as Deputy Warden of the West March. The presence of his true love, the married Elizabeth Widdrington, was no mere coincidence. Before long, Sir Robert was up to his ruff in horse rustling and treason (A Famine of Horses), but he sorted that out with dispatch.
Now he's in trouble again. The rowdy Grahams plan to kidnap Elizabeth as she journeys home to her husband. While Sir Robert storms out to stop them, someone murders the man he has just sacked from his post of paymaster to the Carlisle garrison. When Sir Robert returns, he finds his servant Barnabus slung into the castle dungeon, accused of the crime, and his arch enemy Sir Richard Lowther scheming to have Carey arrested for masterminding the murder....
When even faithful Sergeant Dodd is prepared to believe he did it, the courtier finds his hands full--while ruin stares him in the face--as he juggles the murder inquiry and untangles a skein of love and greed that reminds him most uncomfortably of how carefully he must conceal his love for Elizabeth.
A Season of Knives, based on the real Sir Robert Carey's tumultuous life, is not only a keenly plotted detective story, it's an innovative police procedural and historical writing at its rousing best.
The other works in this series are A Plague of Angels (Introduction by Diana Gabaldon), A Famine of Horses (Introduction by Sharon Kay Penman), and A Surfeit of Guns (Introduction by Barbara Peters). The author is at work on a fifth Sir Robert Carey.
Product Details

Trade Reviews
"Chisholm's brilliant depiction of 16th-century English life, high and low, domestic and public, is neatly held together by his believable and engaging protagonist." — Publishers Weekly
"After a skirmish on the Scottish border, Sir Robert Carey, Deputy Warden of the English West Marsh in 1592, finds one of his men maimed by an exploding pistol. Carey discovers more faulty weapons back at Carlisle Castle, but these are soon stolen, necessitating a dangerous goodwill trip to the riotous camp of the predatory Scottish King James. Feuding clans, political unrest, rowdy humor and exploits, unwise love affairs, and the plight of the poor all play a part in this skillful re-creation of a period rich in action and opportunity." — Library Journal
"Action and adventure abound in this animated historical whodunit." — Margaret Flanagan, Booklist
"Ms. Chisholm's narrative is brimming with period detail so artfully woven in that it's never intrusive. A Season of Knives is a must-read for those who prefer their Elizabethan adventure served with a hearty helping of whodunit." — Historical Novel Society
Customer Reviews
Write Your Own Review