A Clash of Spheres 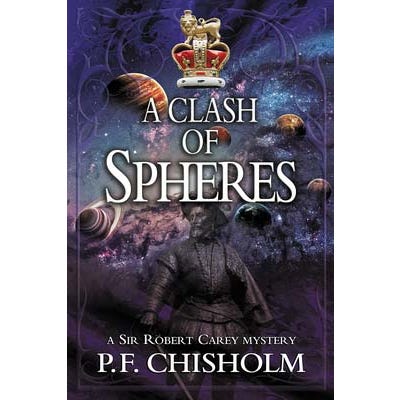 Sir Robert Carey, cousin to Queen Elizabeth from the wrong side of Henry VIII's blanket, remains at his post on the Borders at Carlisle. He has at last been confirmed by his monarch as Deputy Warden, is still deeply in love with Lady Elizabeth Widdrington while despising her elderly, abusive husband (will the man never die?). And he remains estranged from his dour but lethal henchman, Henry Dodd, Land-Sergeant of Gilsland, who is currently serving as one of the sergeants of the Carlisle Castle guard. Dodd can't forgive Carey for taking the high road at the conclusion of the incident at Dick of Dryhope's tower, when Sir Robert called out the Carlisle garrison, but "honourably and skillfully avoided the bloody-pitched battle" that seemed inevitable. Dodd is old-school and would have preferred to exterminate as many under Wee Colin Elliott, and also Grahams, as he could. Not for him, but for peace to the Debatable Land.

Sir Robert Cecil, Privy Councillor to the Queen, warns of a new challenge: the King of Spain's "intentions in Scotland." Will Cecil be sending a pursuivant to the Borders to suss out, and possibly interrupt, whatever plots are in progress against England?

Now it's Autumn. We meet Marguerite, an over-sexed and unhappy wife. Father Crichton, a Jesuit, formerly of Spain. A man who says his name is Jonathan Hepburn but, curiously, thinks in Deutsch. Marguerite's elderly husband Sir David, a Groom of King James' VI's Bedchamber, a jealous man. Various disloyal Scottish Earls. Janet Dodd, wife to Henry, who learns an interesting thing from Mrs. Hogg, the midwife. Hughie Tyndale, a would-be-assassin. Mr. John Napier, a philosopher and mathematician with a revolutionary theory of how the solar system works. Mr. Simon Anricks, a toothdrawer (and philosopher, too) bearing a secret letter from England, who becomes delighted with Mr. Napier. Queen Anne (of Denmark), not yet a mother. And King James, not your usual monarch, plus his court, sycophants, and (former) lover Lord Spynie, who is still plotting revenge. So many spheres of influence or disruption in play.

Events come to a head at the King's court in Edinburgh where a great Disputation on the differences between the Ptolemaic and the Copernican systems, and a demonstration of the planets will be staged, a clash of spheres mirroring the same at the human level.