A Suspicion of Silver 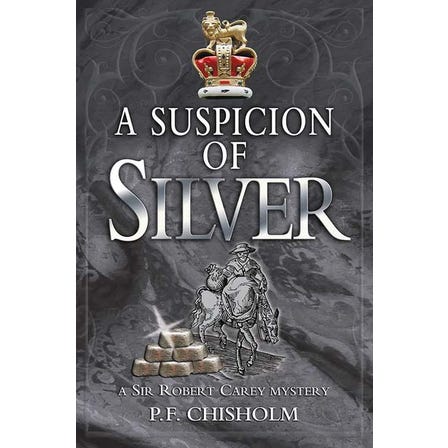 "Mickey Spillane, who famously said 'The last line sells the next book,' would have given her a standing ovation for this one. I have never loved Sir Robert more." —Dana Stabenow, New York Times bestselling author

Sir Robert Carey has just foiled a double plot against King James. He rides for Leith hunting the would-be assassin now identified as Joachim Hochstetter, also known as Jonathan Hepburn. Has he taken ship for the Continent, or ridden nearly 130 miles south and west into England? There at Keswick, his family, originally from Augsburg, runs a mining operation that pays a royalty to Queen Elizabeth in gold. It's ruled by the widow Radagunda Hochstetter, his mother.

Before going after Hochstetter, Carey must escort Dodd's widow back to her home at Gilsland. It's a complex operation involving a cart, Widow Ridley and Skinabake Armstrong. That's the man who sold Janet Dodd to Wee Colin, the Elliot headman, on her way to Edinburgh before Dodd disappeared.

If Hochstetter goes to ground in Keswick, how far will the colony of German miners go to protect Radagunda's favourite child? He may be an outlaw in Scotland, and King James certainly wants his head, but Carey has no official authorization to kill the man in England.

Predictably, the Hochstetter family is politely obstructive. But something else is going on. What in the name of everything unholy is that well-known reiver, Wattie Graham of Netherby, doing so far over the border in peaceful Keswick?

Sir Robert is tested to the utmost in chasing the traitor (underground), solving a murder, arranging a duel—and then his courtship of another man's wife takes a deadly turn.