An Air of Treason 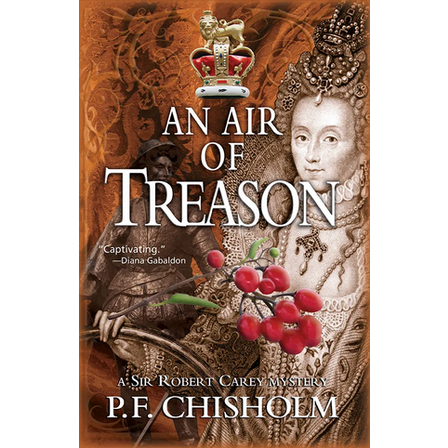 After his hair-raising adventures in London, Sir Robert Carey has finally tracked down Queen Elizabeth, who orders him to investigate the most dangerous cold case of her reign - the mysterious 1560 death of Amy Dudley (née Robsart), unloved wife of Robert Dudley, Earl of Leicester.

Some thirty years back, the late Dudley was Elizabeth's favorite suitor and potential husband. The Queen has since been one of the most obvious suspects in arranging Amy's murder. This makes Carey deeply uneasy with his sleuthing role. Then someone manages to poison Carey with belladonna, which temporarily blinds him. Worse still, the steadfast Sergeant Dodd has disappeared on the road from London.

As the Queen's scandalous past collides with her magnificent State entrance into Oxford, can Carey rally in time to find both Dodd and the true murderer of Amy Robsart?

Trade Reviews
"Carey's sixth adventure is packed with historical detail, dangerous exploits and humor. The fact-based mystery moves along at a fairly quick pace to a complicated denouement." — Kirkus Reviews
"Elizabeth I relies upon Sir Robert Carey to investigate troublesome problems. This time, the queen is the prime suspect in a long-ago murder, and Carey might be overwhelmed. Tudor fans will be captivated by the sixth, well-researched historical adventure." — Library Journal
"The level of period detail on everything from food to clothing and weapons to mercenary soldiering is extremely satisfying—Chisholm fully immerses her readers in the Elizabethan court...Carey is a likeable scoundrel whose misadventures are as full of bravado and political maneuvering as they are sleuthing—a hapless Sherlock Holmes of the 16th century." — Historical Novel Society
"In recommending An Air of Treason, I'm also faunching with enthusiasm for the whole series of mysteries set in Elizabethan times and featuring Sir Robert Carey, courtier, dandy, swordsman, romantic (he married for love, unusual at the time), a man who made malefactors shake and tailors weep. Chisholm has neatly avoided all the banes of historical fiction—first and foremost, she allows the Elizabethans to be themselves, not 21st-century people crammed into doublets and farthingales....The characters are deeply realized... and just plain fun to be around, whether real ones like Carey and Gloriana herself (or, in a bit part, Shakespeare) or splendidly imagined ones like Carey's surly, larcenous and loyal henchman Henry Dodd, Land Sergeant of Gilsland and member of the Carlisle garrison...Sir Robert Carey is distilled essence of Elizabethan, and the books which revolve around him are as successful as both adventure and mysteries..." — S M Sterling, New York Times Bestselling Author
"My favorite fictional sleuth, the dashing Robert Carey, and a mysterious death that we still find baffling; what really happened to Amy Robsart, the inconvenient wife of Queen Elizabeth's lover, the Earl of Leicester? It does not get any better than this." — Sharon Kay Penman, New York Times Bestselling Author
Customer Reviews
Write Your Own Review