Ships to United States, Canada, Mexico, Philippines and 5 other countries. 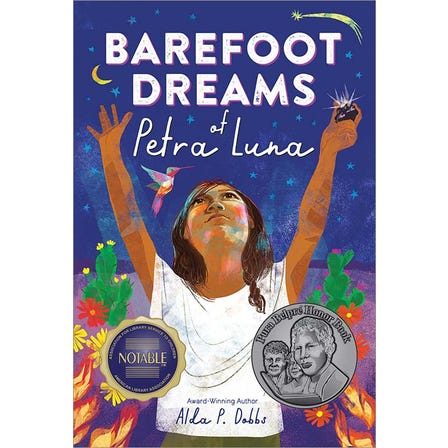 Based on a true story, the tale of one girl's perilous journey to cross the U.S. border and lead her family to safety during the Mexican Revolution

It is 1913, and twelve-year-old Petra Luna's mama has died while the Revolution rages in Mexico. Before her papa is dragged away by soldiers, Petra vows to him that she will care for the family she has left—her abuelita, little sister Amelia, and baby brother Luisito—until they can be reunited. They flee north through the unforgiving desert as their town burns, searching for safe harbor in a world that offers none.

Each night when Petra closes her eyes, she holds her dreams close, especially her long-held desire to learn to read. Abuelita calls these barefoot dreams: "They're like us barefoot peasants and indios—they're not meant to go far." But Petra refuses to listen. Through battlefields and deserts, hunger and fear, Petra will stop at nothing to keep her family safe and lead them to a better life across the U.S. border—a life where her barefoot dreams could finally become reality.

"Dobbs' wrenching debut, about family, loss, and finding the strength to carry on, illuminates the harsh realities of war, the heartbreaking disparities between the poor and the rich, and the racism faced by Petra and her family. Readers will love Petra, who is as strong as the black-coal rock she carries with her and as beautiful as the diamond hidden within it."—Booklist, starred review