By Howard Fast
$19.99
Be the first to review this product 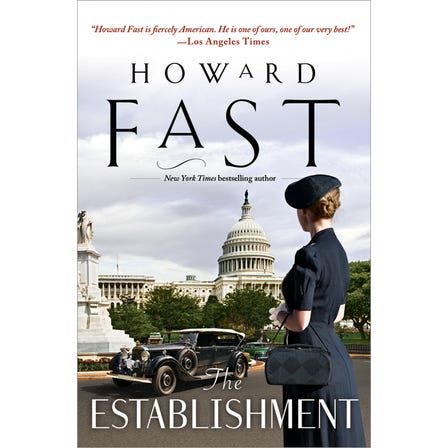 She'll stand up for her family, no matter the cost

Former socialite Barbara Lavette is unconcerned about the gossip that surrounds her new marriage. However, her husband Bernie, a poor mechanic whom she met in the midst of World War II, is willing to do anything to prove his worth to her as well as the society that shuns him.

Barbara will support her husband in any way she can, but when she becomes the victim of an attack by the Congressional Committee on Un-American Activities, she is forced to stand trial. Caught in a Communist witch hunt, Barbara must do whatever it takes to defend her values, clear her name, and find a way to reunite her family.

The third book in Howard Fast’s epic family saga, The Establishment follows the Lavette family as they attempt to persevere in a nation consumed with fear during the tumultuous period following World War II.

Praise for The Immigrants series:

“There hasn’t been a novel in years that can do a job on readers’ emotions that the last fifty pages of The Immigrants does.”—Los Angeles Times

Born in 1914, Howard Fast published over 53 novels, including numerous New York Times Bestsellers. His writing has been praised by the New York Times, The Los Angeles Times, the Chicago Tribune and Time magazine. His most famous novels included Spartacus, Freedom Road, My Glorious Brothers, and The Immigrants series.