Knights of the Hawk

By James Aitcheson
$15.99
Be the first to review this product 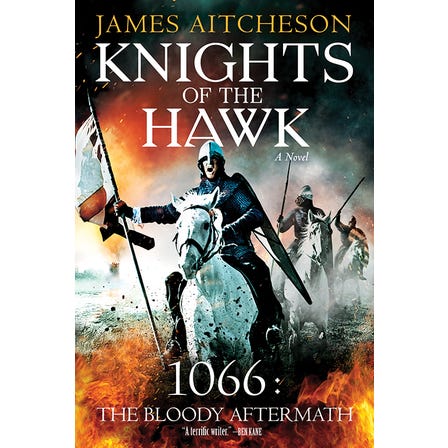 Autumn 1071. Five bloody years after the Battle of Hastings, only a desperate band of rebels in the marshes of eastern England stands between the Normans and absolute conquest.

But the campaign is stalling as the Normans, under King William, are thwarted in their efforts to assault the insurgents’ island stronghold. With morale collapsing, the king turns to Tancred, a proud and ambitious knight and an experienced leader of men, to deliver him the victory that will crush the rebellions once and for all.

For Tancred, this is the opportunity he has been waiting for: a chance to restore his dwindling fortunes and to make
his name. Fulfilling his duty to the king, however, may cost him everything he has fought so hard to gain.

The gripping third novel in James Aitcheson’s Conquest series, Knights of the Hawk is a lightning-paced tale of battle and betrayal, vengeance and redemption, set amid the fury and the chaos of the Norman Conquest of England.

“Full of thrills, battles, adventures, turns and twists, and great characters that are true to the mind-set of their period.”—Historical Novels Review

“Aitcheson skillfully blends history and fiction… Those who enjoy Bernard Cornwell’s books will also revel in the historical details and derring-do.” —Library Journal

James Aitcheson was born in Wiltshire, England, in 1985 and studied History at Emmanuel College, Cambridge, where he developed a special interest in the medieval period. Sworn Sword is his first novel.
Reviews
Write Your Own Review
VIEW
9781492629788
All content and design copyright © Sourcebooks, LLC 2021. All Rights Reserved.