A Funeral in Mantova 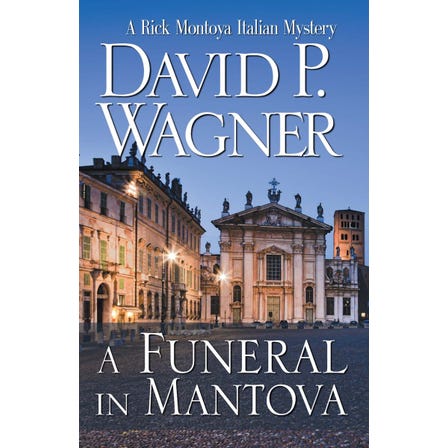 "This is a book for armchair travelers as much as it is for mystery lovers."—Publishers Weekly

Lombardy was once hotly fought over by the cities of Venice and Milan, though today it is famed for its food rather than war. But the murder of an elderly fisherman, Roberto Rondini, reveals the battles that still rage within the region.

Rick Montoya, an American self-employed as a translator in Italy, soon receives a call from the States. The US Embassy in Rome has recommended his services to the Rondini funeral party, some of whose members have been living in the states and need a bit of help with their Italian.

While Rick hires on as interpreter, he soon receives another assignment—a local cop, Inspector Crespi, leads the murder investigation and asks Rick to observe and report. So Rick once again finds himself throwing off the mantle of travel translator to solve yet another murder in Italy. The murder victim owned a parcel of land, and Rick soon learns that the land's use was a violent point of contention to the Rondinis. Is the murderer a part of the funeral party?

Despite the joys and distractions of the city and its watery setting, its glorious art and architecture, and the temptations of the local cuisine, the investigation must probe the life of Roberto and the history of the Rondinis, as well as the rivalries of the locals.

David Wagner's Rick Montoya Mysteries will appeal to readers of Michael Dibdin, Donna Leon, and Martin Walker. And in the newest addition to the series, Rick Montoya becomes entrenched in a conflict with a local family—can a resolution be reached, or will things end in blood?

Other books in the Rick Montoya Italian Mysteries:

Death in the Dolomites

A Funeral in Mantova

Trade Reviews
"Wagner's fifth series entry provides his usual deft mix of art, travel, and suspense." — Kirkus Reviews
"This is a book for armchair travelers as much as it is for mystery lovers." — Publishers Weekly
"Following Return to Umbria, Wagner's fifth series outing features a likable amateur sleuth who carefully analyzes other people. Rich in details of the food and culture of Italy's Lombardy region, this atmospheric mystery will be appreciated by fans of Martin Walker's French-flavored "Bruno" mysteries. Readers of Frances Mayes's Under the Tuscan Sun may enjoy the colorful descriptions." — Library Journal
"...the many details of meals that Rick enjoys on his trip are a highlight, as are the author's appended notes on the food and wines of the area..." — Henrietta Verma, Booklist
Customer Reviews
Write Your Own Review