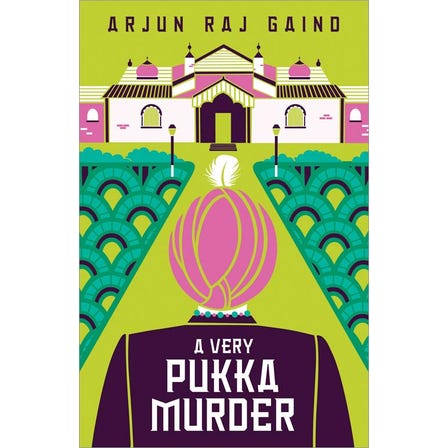 "Set in the tiny princely state of Rajpore, Indian comic book writer Gaind's first novel is both a satisfying locked-room mystery and a keenly observed comedy of manners." —Publishers Weekly

From the borders of icy Kashmir to the shark-infested shores of the Malabar Coast, Major William Russell, the English Resident of the small, princely state of Rajpore, is renowned as a straitlaced man of rigorous habit. When his valet knocks on his bedroom door the morning after the 1909 New Year's Ball and receives no response, he and the Resident's elderly secretary eventually task the English Commandant of Cavalry with breaking it down. The Resident is dead in his bed.

His Highness Farzand-i-Khas-i-Daulat-i-Inglishia Mansur-i-Zaman Maharaja Sikander Singh, Light of Heaven, Sword of Justice, Shield of the Faithful, sole ruler of Rajpore, is slow to rise after the night of revelry. But news of the murder galvanizes him. The fabulously wealthy Maharaja, who perforce has surrendered much of his authority to the British, is a man of indolent habit although he keeps himself thoroughly fit. A lover of luxury cars and beautiful women, his deepest passion is for mysteries. He cannot resist an enigma, relishing a riddle and the rush of resolving it. Like August Dupin and Sherlock Holmes, Sikander wields careful and deliberate logic to crack puzzles that leave less intelligent men confounded. Here is such an opportunity, and well timed—for the Maharaja, resigned to another year of indolence, is almost fatally bored.

Abandoning the lavish comforts of his ornate palace, Sikander orders his massive manservant Charan Singh into his Silver Ghost and speeds to the insular English settlement. Despite the objections of the local Magistrate and the Superintendent of Police, he works the crime scene and deduces that Resident was poisoned by a massive dose of strychnine.

As a clock starts ticking—the British authorities dispatch their own investigator from Simla—Sikander overcomes obstacles, false trails, and the growing hostility of the English Establishment, while learning that Major Russell was not as pukka, as proper, as he liked to pretend. Will the Maharaja work through a surplus of suspects and motives before the British shut him down and cover up the truth about the Major's death?

Arjun Gaind's clever, fascinating debut introduces an elegant new detective in the tradition of Lord Peter Wimsey, while painting a scathing portrait of the British Raj.

Trade Reviews
"The first in a planned trilogy featuring the sleuthing prince is a well-executed mystery in the classic British mold presented from a very un-British viewpoint and packed with fascinating details about life among the Anglo-Indian upper class during the heyday of the Raj." — Kirkus Reviews
"Set in the tiny princely state of Rajpore, Indian comic book writer Gaind's first novel is both a satisfying locked-room mystery and a keenly observed comedy of manners. Fans of traditional mysteries and those with an interest in British colonial history will be rewarded." — Publishers Weekly
"Armchair travelers, mystery readers and history lovers are sure to enjoy this interesting twist on life in the British Empire." — Shelf Awareness
Customer Reviews
Write Your Own Review