By Ed Ifkovic
As low as $23.95
Be the first to review this product 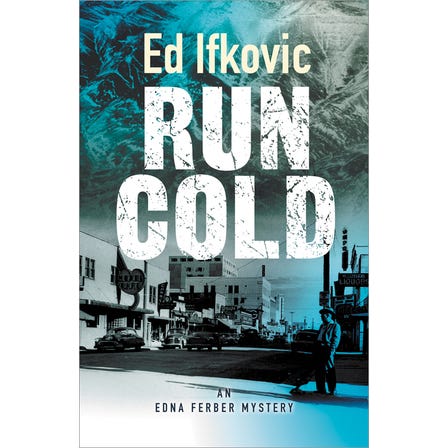 "The Arctic trails have their secret tales
That would make your blood run cold."
—Robert W. Service, "The Cremation of Sam McGee"

Jack Mabie claims to be the meanest man in Alaska, yet the old sourdough seems to be just one of the crusty geezers in every roadhouse bewildered by how his lawless frontier life has morphed into the pastel 1950s world of martini cocktail bars up and down Fairbanks' Second Avenue.

Sonia Petrievich, an editor at The Gold, her father Hank's weekly pro-statehood paper, learns through the mukluk telegraph about Jack's gleeful account of murders and robberies and shell games during the gold rush days. Her breezy March 1957 profile lets Jack revel in newfound notoriety.

Edna Ferber, not completely satisfied with her forthcoming novel Ice Palace, has just returned for further research and is fascinated by Jack and his wild tales. Plus the previous summer, young Athabascan lawyer Noah West, a war hero and Sonia's lover, bent on bettering the lives of Alaskan Natives, had sharpened Edna's sense of a corner of the territory she'd ignored: "I felt I'd lost sight of the real Alaska, the heartless icebox in the North, the blank-eyed old-timers still haunted by gold... I'd forgotten Alaska is still frontier...a violent, mysterious world below the glossy skin I'd written about."

When Jack is found beaten to death, Noah becomes a suspect. Two violent deaths follow. Edna, Noah's advocate, decides she needs to clear his name, believing the murders are connected. As debates over potential statehood rage, Edna begins unearthing scandals and sordid stories hidden in Fairbanks but also dating back to village life in Fort Yukon and down into the Lower 48.

What horrible secrets carried from the Arctic Circle have led to so many murders? And what novelist could stand aside from this story?

Ed Ifkovic taught literature and creative writing at a community college in Connecticut for over three decades. His short stories and essays have appeared in the Village Voice, America, Hartford Monthly, and Journal of Popular Culture. A longtime devotee of mystery novels, he fondly recalls discovering Erle Stanley Gardner's Perry Mason series in a family bookcase, and his immediate obsession with the whodunit world.
Reviews
Write Your Own Review
VIEW
SBCNFG1133
All content and design copyright © Sourcebooks, LLC 2021. All Rights Reserved.