Sunshine On My Shoulders

By John Denver
Illustrated by Christopher Canyon
$8.95
Be the first to review this product 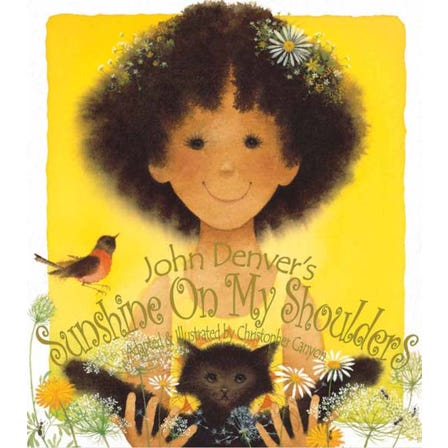 A book on CD for kids, Sunshine on my Shoulders follows the lyrics of a song by John Denver making it the perfect sing along book for toddlers. This preschool music book is a great teaching tool for young readers about the world around us and our responsibility to preserve and protect it.

This exuberant adaptation of John Denver's famous song is "sure to make you smile," even on a dark and cuddly evening with your child. It helps if you can sing—the musical score is included—or just pop in the CD that comes with the hardback edition of the book. Sunshine On My Shoulders celebrates friendship, sunshine and the simple joy of being together. A charming little girl and her father (who kind of looks like John Denver) enjoy a day together in the sun with a guitar, butterflies, a cat, a mouse, and lots of other critters. Canyon's illustrations abound with light, color and lots of humorous detail.

Christopher Canyon is the illustrator of several wonderful books for children. When he isn’t in his studio, Christopher enjoys traveling and providing educational and entertaining programs for schools, libraries, and conferences. Christopher received his formal art education at the Columbus College of Art & Design in Columbus, Ohio. His work has been selected for many exhibits and publications including the Society of Illustrators, the Mazza Collection at the university of Findlay, Ohio, and the Natural History magazine.

Currently Christopher is adapting and illustrating several of John Denver’s songs as children’s picture books. The critically acclaimed Sunshine On My Shoulders was released by Dawn Publications in 2003, Ancient Rhymes: A Dolphin Lullaby in 2004, and Take Me Home, Country Roads in September 2005.

Christopher Canyon shares some thoughts on the project: "To have this opportunity to share John Denver’s music and message with the children of today is truly a dream. John gave the world so many thoughtful songs about relationships; our global need to live together in peace and the importance of caring for our environment. These messages, as relevant today as ever, and John’s music and voice continue to touch our lives and lift our spirits."

Three of Christopher’s books, Sunshine On My Shoulders, The Tree in the Ancient Forest and Stickeen, have won the American Bookseller Association’s Benjamin Franklin Award for best children’s picture book of the year. Chistopher is also the illustrator of Wonderful Nature, Wonderful You and the beautiful Earth trilogy, Earth and You - A Closer View: Nature’s Features, Earth and Us - Continuous: Nature’s Past & Future, and Earth and Me - Our Family Tree: Nature’s Creatures. Christopher lives with his wife and cat in central Ohio.
One of the world's best-known and best-loved performers, John Denver earned international acclaim as a songwriter, performer, actor, environmentalist and humanitarian. Denver's career spanned four decades and his music has outlasted countless musical trends and garnered numerous awards and honors. John Denver's love for nature, his hope and belief in the future, and his brilliance of expression inspired so many people toward "higher ground." Although he died in 1997, we are pleased to bring his timeless lyrics to the next generation.
Reviews
Write Your Own Review
VIEW
9781584690504
All content and design copyright © Sourcebooks, LLC 2021. All Rights Reserved.