Discover the Importance of Saving Our Planet in the Perfect Activist Book for Kids (Discusses Conservation, Climate Change, and Endangered Animals)

By Kristin Joy Pratt-Serafini and Rachel Crandell
$8.95
Be the first to review this product 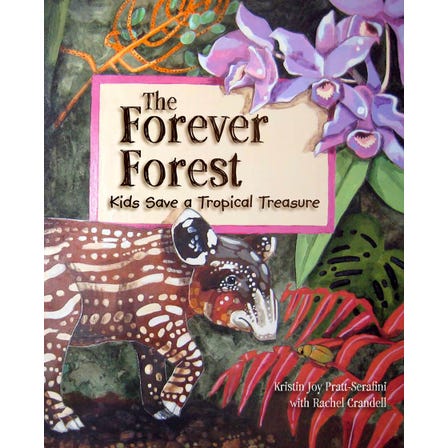 Eye-opening and relatable, The Forever Forest: Kids Saved a Tropical Treasure is the perfect activist book for kids, showing them that they, too can make a difference in saving our planet. This book doubles as an incredible earth day book for kids, encouraging discussions about conservation, climate change, and endangered animals.

The 54,000-acre Childrens Eternal Rainforest in Costa Rica began with a few kids and a bake sale. Word spread, and children from over 44 countries raised the funds to make it happen. Here is its story with a fresh twist, as young Peter discovers that his mother was one of those original kids. The Forever Forest is the perfect forest book for kids, that inspires them to consider their role in saving the planet.

Kristin Joy Pratt-Serafini first connected her love of art with her concern for the rainforest when she wrote and illustrated A Walk in the Rainforest as a freshman in high school. Since then, she has written and illustrated several other environmentally-focused books for children. She hopes her colorful paintings will get kids excited about going outside and exploring for themselves. Kristin first visited the BEN in 1997 as a college student, and was excited to go back with Rachel 10 years later, in March of 2007. As she wrote the story about Anna and Peter, and painted the animals and plants they saw, she could picture every step of their adventure through the rainforest... because she had just been to the BEN herself! Rachel took her on the same hike described in the story. She even saw the Rufous-eyed Stream Frogs on the night hike with Mark!

Rachel Crandell taught at Principia Lower School for 20 years after running a nursery school on their farm in Indiana. She and her husband started the Monteverde Conservation League, U.S. to help protect the Children's Eternal Rainforest. They have a cabin in Monteverde where they spend several months each year. Just like Peter and Anna in the story, her children and grandchildren have walked the paths, climbed the strangler fig, and heard the bellbird BONK. Besides researching and writing the scientific paragraphs for The Forever Forest, Rachel has motivated thousands of children and adults to help protect the BEN. She is known as "Rainforest Rachel" because of the hundreds of presentations she has done for school groups about tropical rainforests, and the trips she leads to Costa Rica.