The Tree in the Ancient Forest

By Carol Reed-Jones
Illustrated by Christopher Canyon
$8.95
Be the first to review this product 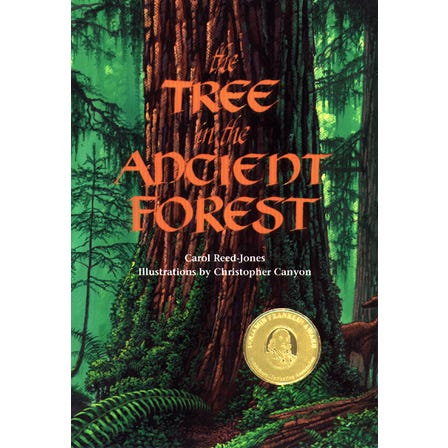 Gorgeous artwork and a cumulative verse poetic technique add to this story of the life within the ancient forests of the world. The ancient forests are crucial to animals and to us. They are irreplaceable and readers will develop a deep love and appreciation for them in this book.

We need the ancient forests of the world, and we have allowed over 90 percent of them to have been cut down. But we can still save the remaining 10 percent. It takes a deep love for something in order to want to work to save it, and this book will give young readers that love for the ancient forests.

The cumulative verse format slowly builds to move readers through the forest to see the three-hundred-year-old tree, the roots, soil, underground truffles feeding the voles and mice that feed the owl and owlets that live in a hollow in the tree. The woodpecker and ants that started the hollow startle the squirrel and the marten, prey and predator running around the tree knocking the fir cones to the ground. There is a whole ecosystem in the ancient forests, and animals and humans depend on it for survival. This book will inspire young readers to love and appreciate these forests.

A perfect book for:

Christopher Canyon is the illustrator of several wonderful books for children. When he isn’t in his studio, Christopher enjoys traveling and providing educational and entertaining programs for schools, libraries, and conferences. Christopher received his formal art education at the Columbus College of Art & Design in Columbus, Ohio. His work has been selected for many exhibits and publications including the Society of Illustrators, the Mazza Collection at the university of Findlay, Ohio, and the Natural History magazine.

Currently Christopher is adapting and illustrating several of John Denver’s songs as children’s picture books. The critically acclaimed Sunshine On My Shoulders was released by Dawn Publications in 2003, Ancient Rhymes: A Dolphin Lullaby in 2004, and Take Me Home, Country Roads in September 2005.

Christopher Canyon shares some thoughts on the project: "To have this opportunity to share John Denver’s music and message with the children of today is truly a dream. John gave the world so many thoughtful songs about relationships; our global need to live together in peace and the importance of caring for our environment. These messages, as relevant today as ever, and John’s music and voice continue to touch our lives and lift our spirits."

Three of Christopher’s books, Sunshine On My Shoulders, The Tree in the Ancient Forest and Stickeen, have won the American Bookseller Association’s Benjamin Franklin Award for best children’s picture book of the year. Chistopher is also the illustrator of Wonderful Nature, Wonderful You and the beautiful Earth trilogy, Earth and You - A Closer View: Nature’s Features, Earth and Us - Continuous: Nature’s Past & Future, and Earth and Me - Our Family Tree: Nature’s Creatures. Christopher lives with his wife and cat in central Ohio.
Carol Reed-Jones lives in the Pacific Northwest with her husband, son, dog, and cat. She enjoys hiking, camping, backpacking, and watching Douglas squirrels from her living room window. She strongly believes in living in ways that preserve the earth and all life. In addition to her writing, Carol teaches music, directs an early music vocal group, and is completing her Master's thesis in music history. Carol has written two books for Dawn Publications, the Ben Franklin Award-winning The Tree in the Ancient Forest and the beautiful new Salmon Stream, which follows the life cycle of salmon in cumulative verse.
Reviews
Write Your Own Review
VIEW
9781883220310
All content and design copyright © Sourcebooks, LLC 2021. All Rights Reserved.