By Laurie Ellen Angus
As low as $8.95
Be the first to review this product 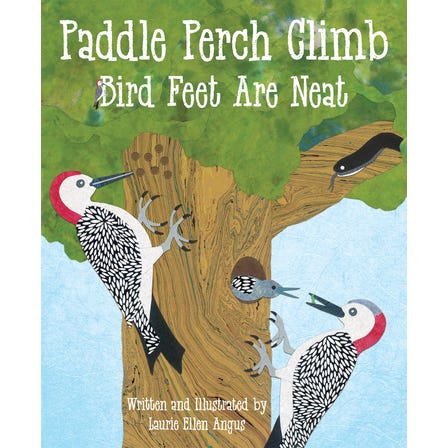 Did you have any idea how important bird feet are? In this book, kids will discover many of the different traits and characteristics of various birds and their feet!

Become a bird watching detective, discovering clues about where a bird lives, how it moves, and what it eats by looking at its feet. Laurie Angus' bright, bold illustrations and simple text invite children to guess what birds will be revealed on successive pages. They include a bird with strong legs and feet running across the desert to snag a lizard for lunch (roadrunner); a bird with flexible toes perching on a branch to pick berries (cardinal); and a bird with long legs and toes wading through a river to search for fish (heron). But look out! Predators are watching the birds, and they are hungry!

Laurie Ellen Angus grew up near the beach and could often be found knee deep in the water searching with delight for sea creatures to play with, such as horseshoe crabs, and also routinely chasing her younger brother around with them. Laurie doesn't chase her brother anymore, but does continue her fascination with the ocean, often taking long walks and observing the diversity of sea life along the shore. Laurie attended Parson's School of Design in NYC. Combining her love of nature and design into her artwork, she hopes to inspire children to have a similar fascination of the many amazing creatures that live in the ocean. Laurie lives on Long Island, New York, with her husband Richard, two quirky cats, and a rambunctious rabbit. This is Laurie's debut book.