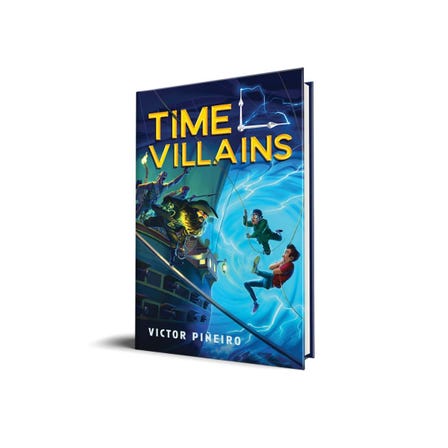 Story Thieves meets Escape from Mr. Lemoncello's Library in this wacky, hilarious, and fast-paced middle-grade series starter, with the perfect combination of magic, imagination, and adventure.

Javi Santiago is trying his best not to fail sixth grade. So, when the annual "invite any three people to dinner" homework assignment rolls around, Javi enlists his best friend, Wiki, and his sister, Brady, to help him knock it out of the park.

But the dinner party is a lot more than they bargained for. The family's mysterious antique table actually brings the historical guests to the meal…and Blackbeard the Pirate is turning out to be the worst guest of all time.

Before they can say "avast, ye maties," Blackbeard escapes, determined to summon his bloodthirsty pirate crew. And as Javi, Wiki, and Brady try to figure out how to get Blackbeard back into his own time, they might have to invite some even zanier figures to set things right again…

Praise for Time Villains:
"Piñeiro scores with this tale of friendship, magic, and adventure... Magnificent."—Kirkus Reviews, STARRED Review
"It's got heart, it's got thrills, it's got pirates! You won't be able to put down this action-packed, relentlessly funny adventure."—Sarah Mlynowski, author of the New York Times bestselling Whatever After series
"A magical table that pulls in famous people from history and fiction? Is this the greatest idea for a book ever? Yes. Yes it is. Come join the best dinner party in history (and books), full of pirates, sandwiches and history's greatest figures!"—James Riley, New York Times bestselling author of The Story Thieves series