Playing, Growing and Exploring with Babies from Birth to 15 Months

By Sheila Ellison and Susan Ferdinandi
$17.99
Be the first to review this product 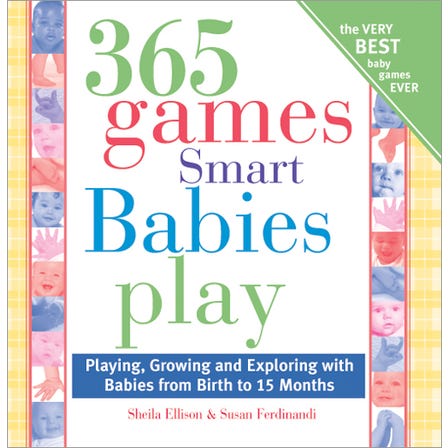 “A marvelously simple, clear and practical guide to parenting in the first days, months and years!”—Diana Huss Green, Parents’ Choice

Each day with your baby brings new moments of caring, teaching, holding and growing through baby’s first experiences.

Filled with magical ways to create and enhance those special everyday moments, 365 Games Smart Babies Play will help you celebrate each once-in-a-lifetime opportunity you and your baby share. Illustrated by children.

Sheila Ellison is the dedicated mother of four children and the stepmother of two. She is the creator and author of the 365 Series of parenting books, including 365 Games Babies Play, 365 Days of Creative Play, 365 Afterschool Activities, 365 Foods Kids Love to Eat, and 365 Ways to Raise Great Kids. She has appeared on Oprah, the Later Today Show, and the CBS Early Show. Her books have been featured in O Magazine, Parenting, Family Circle, Glamour, Complete Woman, Healthy Kids Magazine, New York Daily News, and San Francisco Chronicle, and have been selections of the Children's Book-of-the-Month Club. Sheila has appeared on hundreds of radio shows across the country. She continues to write and lives in Northern California.

Susan Ferdinandi is the Assistant Director and teacher at the Little School in Benicia, California. She holds a Bachelor of Arts degree from the University of Minnesota and is a member of the National Association for the Education of Young Children. Susan is the mother of two children, ages seven and five. She believes that caring for, playing with and observing her children is her life's most important work.
Reviews
Write Your Own Review
VIEW
9781402205361
All content and design copyright © Sourcebooks, LLC 2021. All Rights Reserved.