The World According to The Simpsons

What Our Favorite TV Family Says about Life, Love, and the Pursuit of the Perfect Donut

By Steven Keslowitz
$17.99
Be the first to review this product 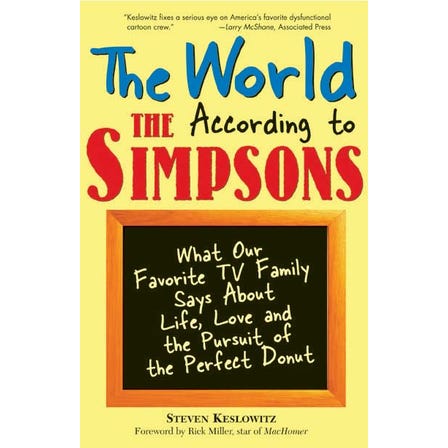 When The Simpsons premiered, many hailed it as a sign of society's decline. And to them we say: D'oh!

Instead, The Simpsons has become the smartest and most pointed look at the world we live in-all while becoming everyone's favorite TV family.

The World According to The Simpsons is a hilarious and insightful study of what The Simpsons has to say about society, and how society is affected by The Simpsons.

What does Marge say about the state of modern feminism? Are we too obsessed with "Hollywood Jerk" celebrities? Are Americans as great as they think? Is Homer the new industrialized employee? Will no Simpson child be left behind?

No issue is settled until the Simpsons have had their say. So sit back, relax, and explore the wisdom of Springfield and what it means for our society. Or as Homer might say, "Mmm…bookalicious."

Steven Keslowitz is a University Scholar in the CUNY Honors College at Brooklyn College. He has presented a number of lectures on The Simpsons and has appeared on NBC's Early Today and Fox 5 News. Steven's writings on The Simpsons have received international recognition, as he has given interviews with radio stations in the United States, Canada, and Ireland. His views on the political and social significance of The Simpsons have been featured in more than five hundred newspapers and other media outlets across four continents, including The Washington Post, NY Daily News, Miami Herald, Toronto Star, CNN.com, Yahoo! Asia, and MSNBC.com. His writing on The Simpsons is required reading for English, Writing, Sociology, and Simpsons courses taught at Tufts University, Carnegie Mellon University, Drury University, Montana State University, and the University of Colorado at Denver, among others.