Pieces of My Mother

By Melissa Cistaro
$14.99
Be the first to review this product 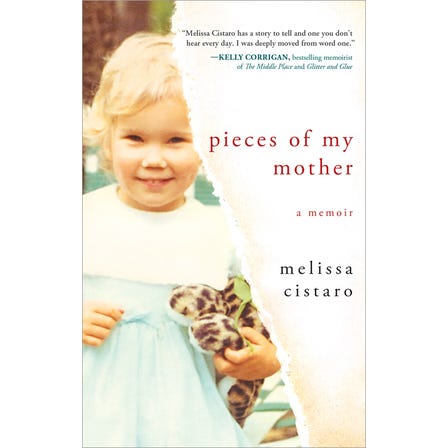 “A story that lingers in the heart long after the last page is turned.” —HOPE EDELMAN, bestselling author of Motherless Daughters and The Possibility of Everything

This provocative, poignant memoir of a daughter whose mother left her behind by choice begs the question: Are we destined to make the same mistakes as our parents?

One summer, Melissa Cistaro’s mother drove off without explanation Devastated, Melissa and her brothers were left to pick up the pieces, always tormented by the thought: Why did their mother abandon them?

Thirty-five years later, with children of her own, Melissa finds herself in Olympia, Washington, as her mother is dying. After decades of hiding her painful memories, she has just days to find out what happened that summer and confront the fear she could do the same to her kids. But Melissa never expects to stumble across a cache of letters her mother wrote to her but never sent, which could hold the answers she seeks.

Haunting yet ultimately uplifting, Pieces of My Mother chronicles one woman’s quest to discover what drives a mother to walk away from the children she loves. Alternating between Melissa’s tumultuous coming-of-age and her mother’s final days, this captivating memoir reveals how our parents’ choices impact our own and how we can survive those to forge our own paths.

Melissa Cistaro is a bookseller and the events coordinator at Book Passage, the legendary San Francisco Bay Area independent bookstore, where she has hosted more than 200 authors. A writer and mother of two, she has been interviewed on a number of radio shows and has been published in numerous literary journals including the New Ohio Review, Anderbo.com, and Brevity as well as in two anthologies alongside Anne Lamott, Jane Smiley, and other writers. Melissa graduated with honors from UCLA and continued her education with the UCLA Extension Writers' Program. She has participated in the Tin House Writer's Workshop in Portland and The Writer's Studio in Los Angeles. She lives in San Francisco.
Reviews
Write Your Own Review
VIEW
9781492623113
All content and design copyright © Sourcebooks, LLC 2021. All Rights Reserved.